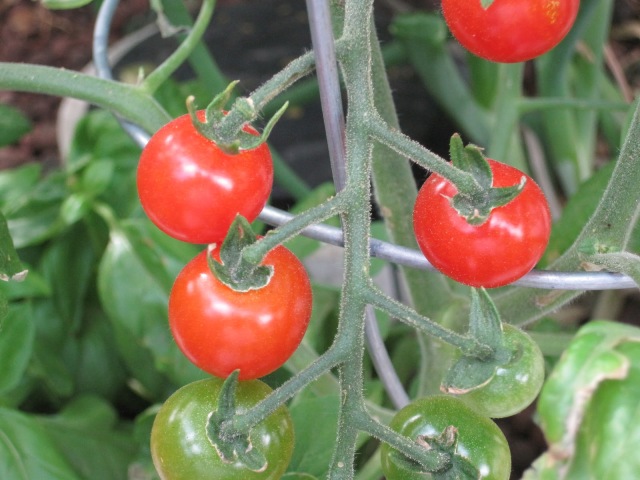 As I write this I’m sitting in the backyard with my laptop, tiki torches lit, listening to Adele playing through a bluetooth speaker and feeling grateful for the modern technology that allows this.  And then around the corner lies the very non-technological garden plot that flummoxes me and supplies me with new mysteries to contemplate each and every day.

I should clarify that the reason I am blogging about our gardens is not because we are experts in gardening.  These gardens, both the traditional soil garden and the aquaponic garden, are works in progress and we are learning through trial and error, as well as getting advice from friends and friendly folks we meet at the garden center. When I last wrote a garden update, things seemed to be progressing very nicely.  We had had a series of windstorms that wreaked some general havoc, but all the plants were healing up nicely.  Today, there are some new developments and some explosive growth as well as a few plants that I’m about to write off as a fail.  Now, I am not one of those people who has a “green thumb” who can make anything grow with little effort.  Nope, my thumbs are most assuredly brown, but  like I said, I’m learning!  But because I’m a novice gardener with brown thumbs, I’m also a constant worrier.  Am I fertilizing enough? too much?  Are the plants getting enough water? too much water? Should I be worried about those funny white spots? Why are the cucumbers and squash withering on the vine? What is eating all of my petunias?!
I’ll get to some of these questions, but first, I’ll start with the exciting stuff!  The Sweet 100 tomatoes are starting to turn red already!  It seems early to me, but I’m not going to complain about it!  They are still rather small and I joked today that I was going to make the worlds tiniest caprese salad with them.  But what they are is numerous!  They don’t call them Sweet 100s for nothing!  The plant in the aquaponic bed has at least 50 little tomatoes on it and the plant itself is getting huge!  The rest of the tomatoes are doing very well, each with fruit and flowers…except for one.  The “Early Girl” in both beds still hasn’t set flowers! So, now, I shall dub it “Late Girl”.  I’m pretty sure that the Early Girl tomatoes we planted last year had fruited by this time, so it is a mystery as to why it’s holding back.
Our gardens are currently located on the northern side of our east-facing backyard.  What that means is though our backyard gets wonderful morning sun, the side yard doesn’t get the requisite eight hours of sunlight that a garden should have.  So, while the gardens are growing very well, the plants are competing for the available sunlight and some of them aren’t thriving as well as they could be.
Something else we’re learning about is fertilization.  I don’t know if anyone else has noticed, but there is a huge shortage of bees, and the one bee that seems to have been assigned to our yard doesn’t seem to realize that there are lots of flowers just around the corner that need fertilizing!  We have come to the realization that some of our plants will have to be fertilized by hand.  Which brings me to the zucchini and yellow squash.  Until recently, I did not realize that not every flower on the squash plants become a fruit, as do the tomatoes.  Each plant has both male flowers and female flowers and they do not self-pollinate.  The male flowers are large and showy and last about a day and then they shrivel and fall off a few days later.  The female flower contains a miniature version of the fruit right in front of the flower bud.  You can tell them apart because the male flower is on an evenly thin stem and the female is thicker and bulbous.  So, while we were excited to see the first crookneck squash growing, that excitement turned to dismay when the little squash eventually shriveled up and fell off.  Then it happened again, and I started to panic!  My fantasies of hauling bushel baskets of squash around to the neighbors were fading quickly!  I did a little research and found that the problem was lack of fertilization.  That lazy bee!  Now we are being vigilant and waiting for the female flower buds to open so that we can quickly transfer pollen from the male flower with a cotton swab.  Plant sex….we’re having it.
Oh, and remember I mentioned those funny white spots?  Turns out it is some kind of powdery mildew that needed to be treated or it would spread to other plants.  I found a recipe online to combat this:  1 teaspoon of dish soap, 4 teaspoons of baking soda to one gallon of water.  I’ve been spraying this mixture on the leaves every day and so far, it seems to be working.  Have I mentioned how thankful I am for the internet?
The cucumbers are not doing very well at all.  They just don’t seem to be growing at all and the little tiny cucumbers are shriveling and falling off.  The leaves are mottled and crispy. I suspect it is partly a fertilization issue, like the squash, but I also worry that they are simply not getting enough sunlight.  I’m going to plant some new cucumber plants in a pot in a sunnier spot in the backyard and see if it makes a difference.

Today, I planted some new eggplants in a pot to see if they will do better with more sunlight.  Eggplants are self-pollinating, like tomatoes, so, at least that’s not the reason they aren’t doing well.  The Japanese eggplants in the traditional bed are not thriving and the plants aren’t hardy enough to support fruit.

On a positive note, on Earth Day, I planted a flat of mesclun and a window box of spinach.  So far, they are growing well!  According to the mesclun package, they should be ready to harvest by May 22!  Here’s how they are doing so far:
So, that is how my gardens are growing! I would love to hear how your garden is growing and what challenges you’ve had as well as any advice you might have for us as well!