Last week, figs made an unexpected appearance at the grocery store.  I was pretty sure that last year, the figs didn’t arrive until late August, early September, so I was a little bit dubious about such an early arrival.  But, since figs are one of those, here-and-gone-in-a-minute kinds of fruits, I just had to buy some just in case they were in season and I had my dates wrong!  It turns out that California fig season started a little early this year because of a very warm winter.  Figs have a very short shelf life which I found out first hand when I opened the box two days later and saw that some of them had already begun to mold! So, with a fire lit under me I knew I had to do something with them immediately.  I opened the refrigerator and the ingredients appeared to me like the digital rain of the Matrix! Bread–got it! milk, eggs, fresh blueberries and what have we here…ah, a chunk of feta cheese! 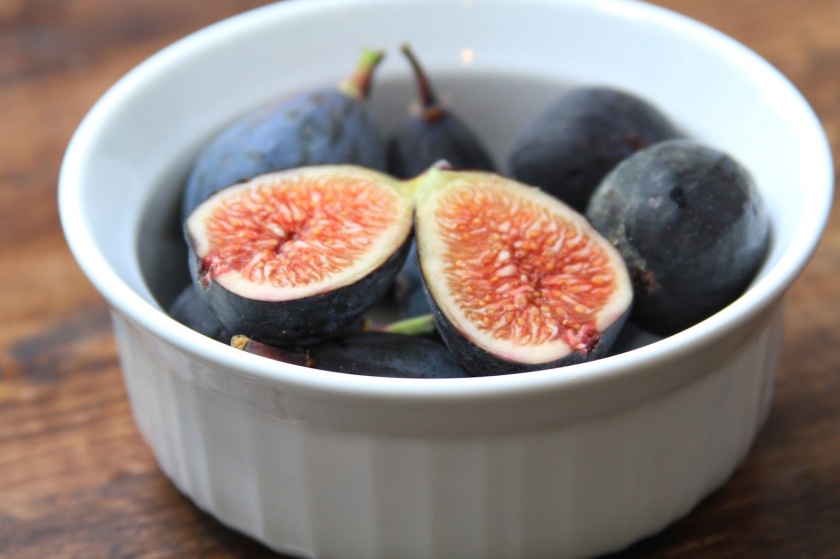 Yep.  Feta cheese.  Now some of you might be thinking that sounds like crazy talk, but stay with me here and I’ll explain my reasoning.  I am not a huge fan of sweets.  You can probably tell this by the relatively small number of desserts on this blog.  So, my first thought when I encounter a sweet ingredient is “how can I balance this?”  Sometimes I choose a spicy ingredient and other times I choose salty.  This time, it would be salt to balance out the overt sweetness of figs, honey and the inevitable maple syrup that would be drizzled over the top.  I knew before I took the first bite, that it was just crazy enough to work and that you would hop on board with me! 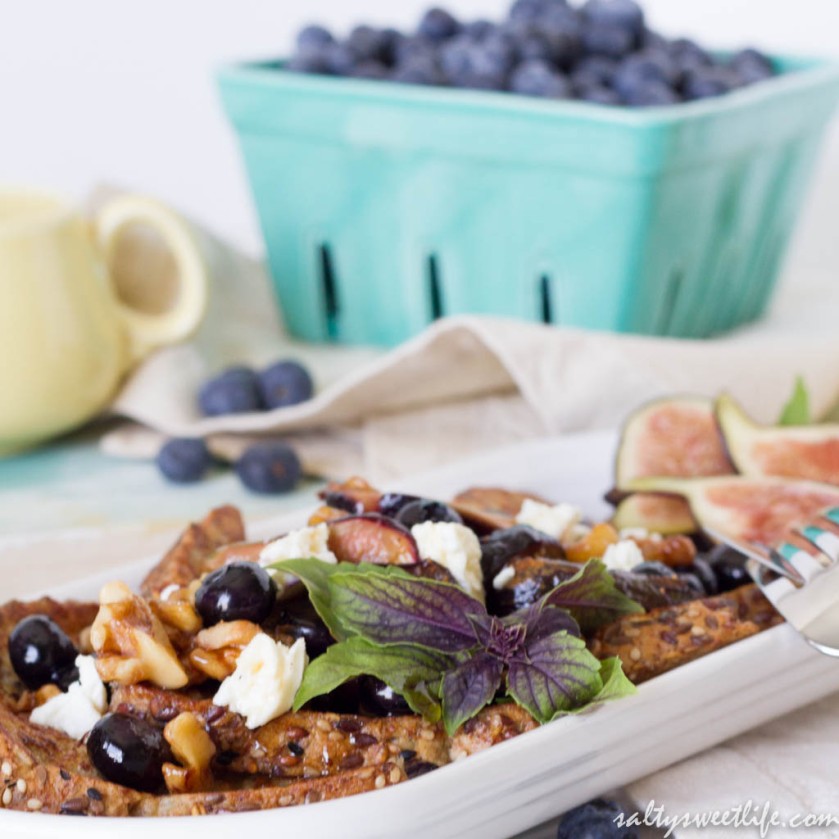 The recipe and method for the French Toast is not exotic, although I did not use dairy milk in the base, but almond milk.  I thought about making the French Toast with fancy, artisanal bread, or even homemade bread, but opted instead to use my favorite store-bought bread–“Good Seed Bread” from Dave’s Killer Bread.  I buy this bread from Costco, but I’ve heard that it can also be found at Whole Foods Market.  I love this bread! It makes the best toast and is amazing sandwich bread.  The fun part, however, is the topping.  The figs are quickly browned in a little coconut oil and joined by walnuts, fresh blueberries and a drizzle of honey.  Then the whole thing comes together with a bit of feta cheese sprinkled over the top!  I have a feeling that a nice, blue cheese would be fantastic as well. 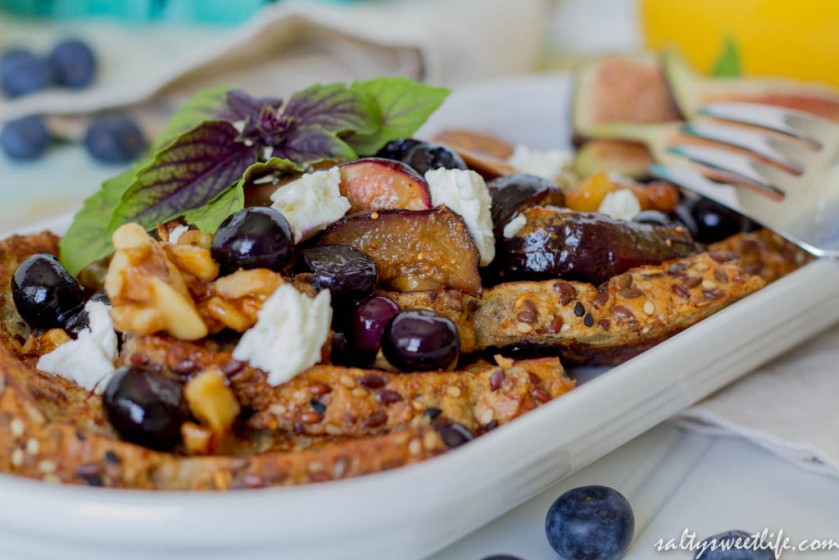 Serve the French Toast with a few spoonfuls of the fig, walnut and blueberry mixture. Top with a sprinkle of feta cheese and a drizzle of maple syrup. 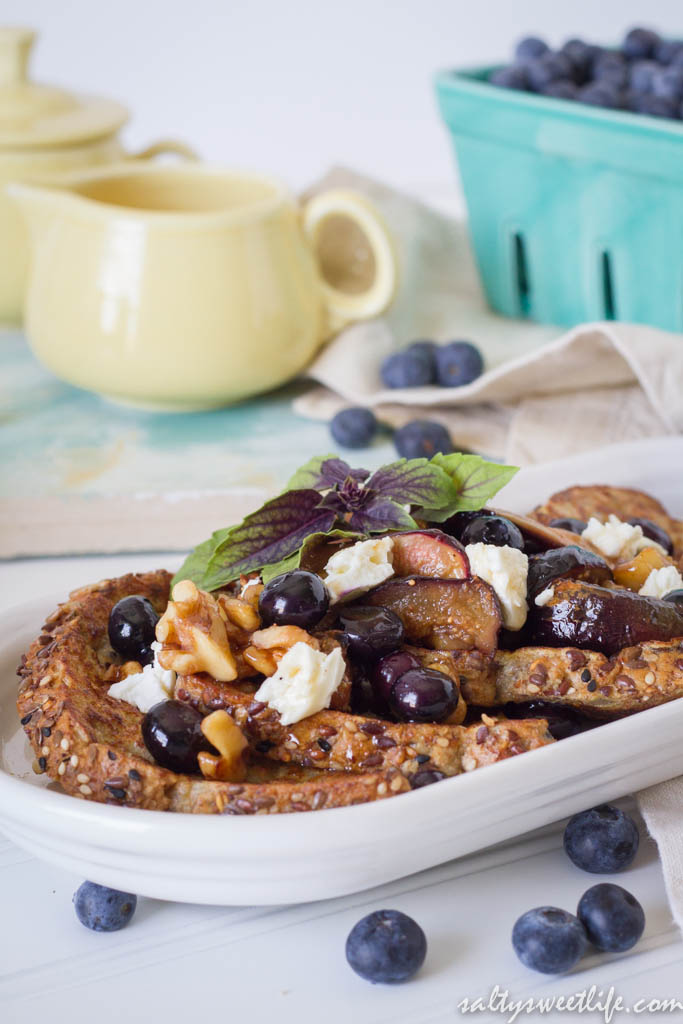 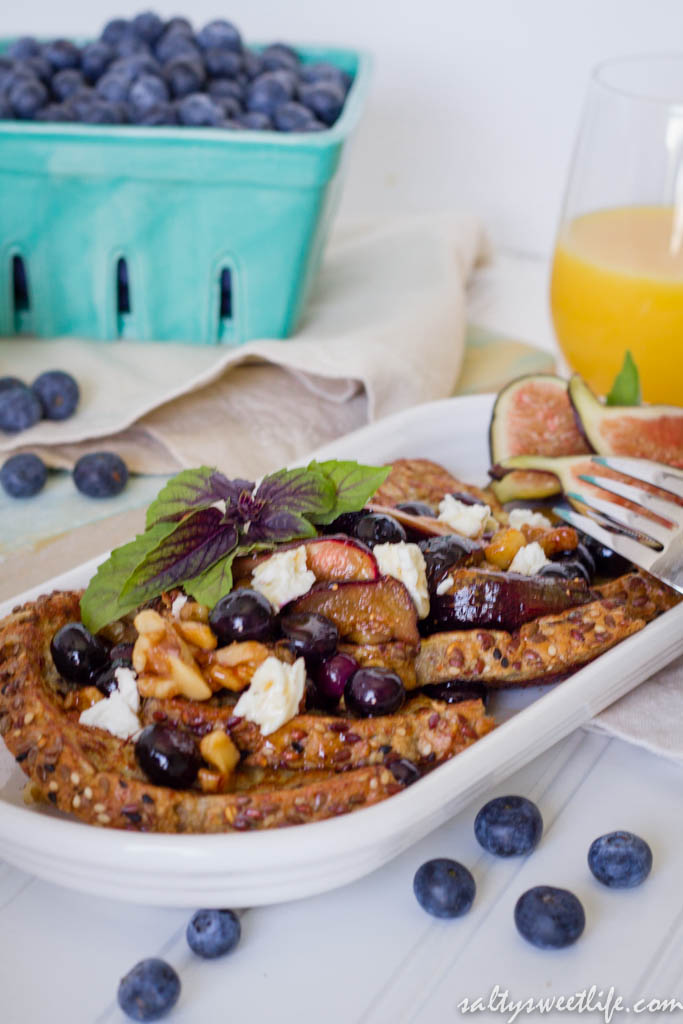 If you can find fresh figs in your area now, pick some up before they are gone in a flash!  If not, save this recipe for August and September when figs are in peak season again!  Personally, I think the figs that arrive in late summer have better flavor, but these early season figs were made sweeter with that little touch of honey.