I have a good friend whom I love to watch eat.  Ok, that sounds terribly creepy, but let me explain.  She will assemble a bunch of different ingredients, be it on a spoon, a cracker or a crostini, pop it into her mouth and then exclaim, eyes rolling back in her head: “oh my god that is such a Good Bite!!” Then excitedly, she’ll assemble it again, just the way she did it the first time and make sure everyone gets to experience that Good Bite! It’s so funny and such a pleasure when someone gets that excited about a bite of food, and that is exactly how I felt when I assembled this ceviche.  It looked like a wicked-weird combination of ingredients but when I built a little forkful of it: a little bite of fish, a chili pepper, a bit of grapefruit, a sliver of fennel and a lemon balm leaf; and tasted it, I found myself squealing just like my friend!  It was such a Good Bite!  I immediately called Eric into the kitchen and assembled the same bite for him and made him try it and the first words out of his mouth were: “there’s something in there that tastes like yellow Trix”.  What?!  Ok, I didn’t expect that, but he loved the bite, too (even with that odd association with “yellow Trix”)! I knew I had something awesome on my plate and I just had to share it with you!

So, let’s talk about these ingredients.  First and foremost, I chose Rockfish on the (rather emphatic) recommendation of the fishmonger at Whole Foods.  It’s normally sold filleted and the flesh is firm, pink and mildly flavored and it is this mild flavor that is really needed for a ceviche.  It absorbs the flavors of the citrus very well and is a perfect canvas for the other ingredients.  Whether you choose rockfish or another mild-flavored fish that is available in your area, be sure that it is very, very fresh.  Ceviche is a raw fish preparation where the fish is “cooked” in citrus juices, so you’ll want the freshest fish you can find. Ask your fishmonger to let you sniff the fish before they package it up for you if you have any doubts–it should smell briny like the ocean, but it should not smell funky or fishy. In addition, rockfish is very reasonably priced and at $11.99 per pound it won’t break the bank. I used two fillets for this dish, which was just under a pound.

Next up the pickled fennel.  Yes, this is an extra step and maybe even worthy of labeling this recipe with a “moderately fussy” descriptor, but let me assure you, making this quick pickle is so easy.  It takes only a few minutes of time to assemble, and then most of the preparation time after that is just to allow the brining liquid time to cool, so don’t let the 1 hour prep time scare you.  Pickled fennel is a revelation.  I never even considered pickling fennel until I had this amazing dish at a Japanese restaurant here in town called Yonaka Modern.  One of their sashimi preparations featured both pickled fennel and a dehydrated fennel crisp! Sweet and crisp and tart, the fennel added a special dimension to that dish and that’s exactly why I had to make some for this ceviche.

Chiles are so important for a ceviche to really “pop”.  I have made a ceviche before using peppers that weren’t hot enough and while it was good, it didn’t make my tastebuds stand up and give a round of applause! I chose one red Serrano chile and one green Serrano chile, and I tasted them just to make sure they were hot enough.  These were perfectly nuclear, so I felt good about de-seeding them both!

The red grapefruit adds a punch of brightness and its characteristic bitterness just sings next to that mild fish.  To top it off, I used a handful of lemon balm and mint leaves.  Lemon balm is new to my garden this year and I am so in love with this herb! It’s in the mint family, so of course, it grows like crazy, but it has the most wonderful, lemony scent and flavor.  This was the “yellow Trix” flavor that Eric was trying to identify, and you know, he wasn’t too far off because it is sweet and lemony!

All of these flavors together make this ceviche a Very Good Bite, indeed! Sweet, salty, spicy and tart–I couldn’t ask for anything more! I hope I’ve convinced you that you should RUN, don’t walk and Make. This. Ceviche. 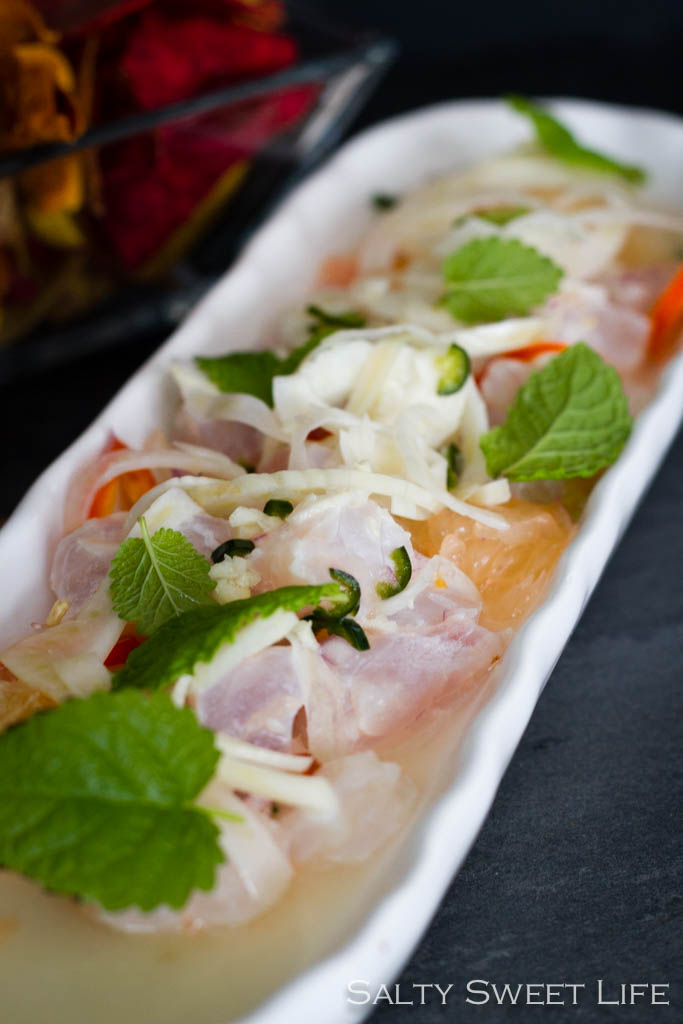 For the pickled fennel:

In a small saucepan, combine the vinegar, water, sugar, salt, peppercorns, red pepper flakes, garlic and grapefruit zest and heat until the sugar is completed dissolved. Pack the sliced fennel bulb in a clean glass jar or a non-reactive bowl. Pour the pickling liquid over the sliced fennel bulb and allow it to come to room temperature, then refrigerate. 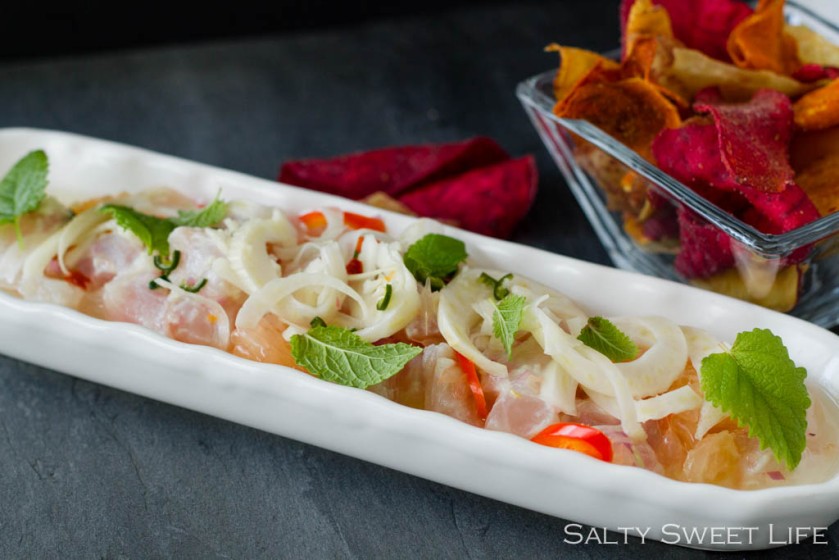