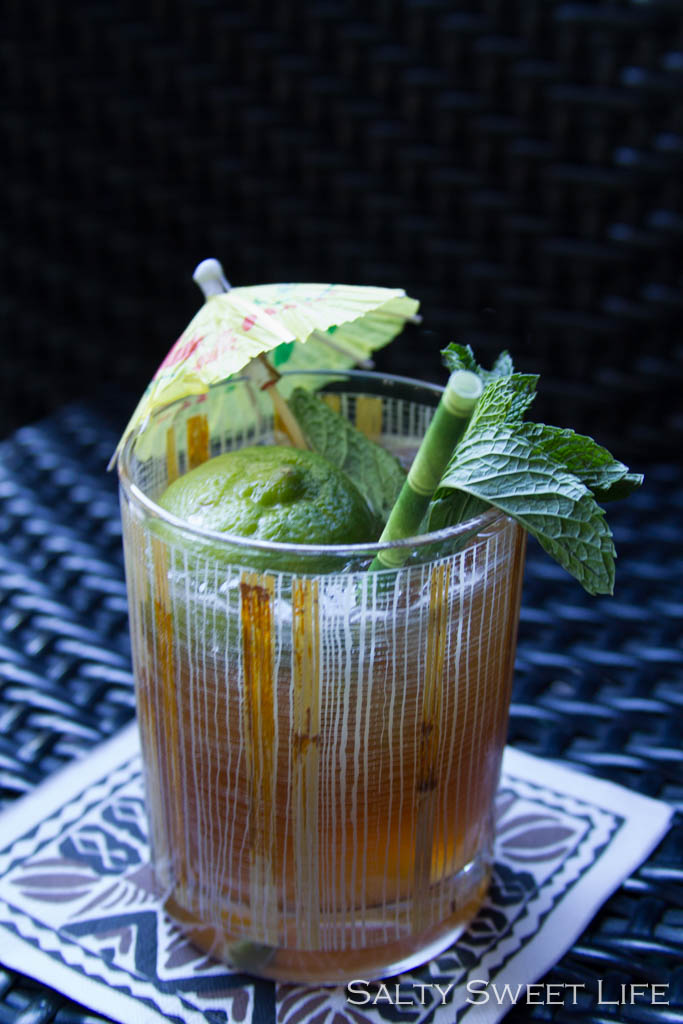 I have a real treat for you because today I’m going to tell you about my good friend and brother-from-another-mother, Adam Throgmorton.  I met Adam this past winter at a pub crawl and I knew from the start that we were going to become fast friends. Architectural model builder, Disney Fanatic, Tiki Enthusiast and all-around mad genius, Adam is a force to be reckoned with and yet, he seems to genuinely believe that he’s a mere mortal like the rest of us! I chuckle at this, because once you spend any amount of time in his home, you realize that this guy is an Artist, with a capital A.  Adam has managed to create an atmosphere in his Southern Nevada home that will make you think you left the desert and stepped straight into paradise! So when the invitation came to spend an evening drinking Mai Tais poolside in his Tiki Terrace, I was over there quick as a flash with a platter of ceviche and doing my best impersonation of a person who could handle their liquor! See how I sacrifice for you? After an amazingly fun evening, I left there with a ton of great inspiration for my backyard, some ideas of how to bring a swanky vibe to my next cocktail party, and I learned how to mix a mean Mai Tai!

When you think of “tiki” what’s the first thing that comes to mind?  For me, it’s that three-part episode of the Brady Bunch when they all went to Hawaii and Bobby Brady found an ancient Tiki statue at the construction site! Remember that trilling “toodle-loodle-loo” sound every time something terrible was going to happen?  You’re going to have that in your head now for the rest of the day…and you’re welcome.

Tiki Statue discovered in Hawaii–I’m told this may be related to Bobby Brady’s tiki idol…no bad luck has come of it, however.

Now, imagine the good parts of that episode–the fantastical, the mysterious, the exoticism of Hawaii; distilled of the Brady Bunch’s signature cheesiness and instead elevated to an art form.  It’s that fantastical vacation paradise that Adam has created in his own backyard.  As I entered the house I was greeted by the lilting sounds of Martin Denny–the “Father of Exotica” on the stereo and handed the most gorgeous Mai Tai in a vintage tumbler, complete with a little umbrella!  I was instantly transported to another time and place.  A more magical place–a place that’s a little swankier and a little more genteel, where the Tiki torches burn brightly and the lights twinkle like fireflies in the night.

If you’ve ever been to Disney World or Disneyland and visited the Enchanted Tiki Room, then you are already familiar with the look and sounds of Tiki. It’s characteristically Polynesian, but seen through an American lens, or as Adam explains it’s an “uniquely American…..mid-century, heterosexual version of ‘the other'”.  Adam credits his love for Tiki culture not with the Brady Bunch episode (which amazingly he still has not seen), but to his parents–his artist mother and his father, an architect and developer, who had built a tiki lounge in the basement of their suburban Illinois home.  According to Adam, the Tiki room and the joy that it brought his family inspired a life-long fascination with Tiki culture and a love for the magic of Disney, which he later discovered when his family lived in Florida for a period of time.    It was his love of all things Disney that brought him to Las Vegas to pursue his dream of becoming a Disney Imagineer, studying art and architecture at the University of Nevada Las Vegas. What began as a dream of becoming an Imagineer evolved into his dream career building scale architectural models for clients such as Wynn Resorts.

Adam built his Tiki Terrace in 2011 and says that the original structure took approximately one month to build. He’s been busy ever since, embellishing and furnishing it with pieces that he has either crafted by hand or collected through his travels. Each piece in the Tiki Terrace has a story, down to the carved wooden statue that he reverently places on the bar when he makes the drinks. It’s an exquisite piece, carved by his late mother, and serves as the guardian of the bar.

Photos taken during the construction of the Tiki Terrace – 2011. Photos courtesy of Adam Throgmorton 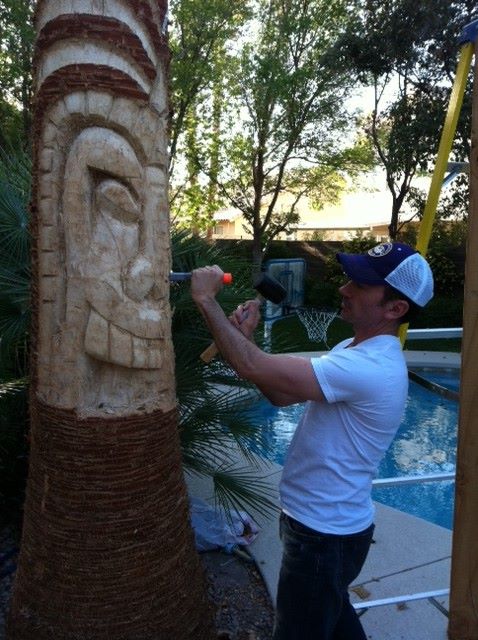 I was absolutely stunned at the level of detail that Adam put into his Tiki Terrace.  I’ve been to the Tiki Terrace several times now, and this was the first time I realized that the bamboo poles in the ceiling were not actual bamboo, but PVC, which Adam carved and painted to look like natural bamboo!

It’s this attention to detail that he brings to his signature Mai Tai. A little history of the drink:  the credit for the original Mai-Tai is given to Victor Bergeron, who founded the Trader Vic’s chain of Polynesian themed restaurants. Trader Vic, as he is called, created the drink in 1944 for his Oakland restaurant. It’s a potent mixture of rum, orange curaçao, lime juice, orgeat syrup, rock candy syrup shaken with lots of ice and garnished with a fresh mint sprig. 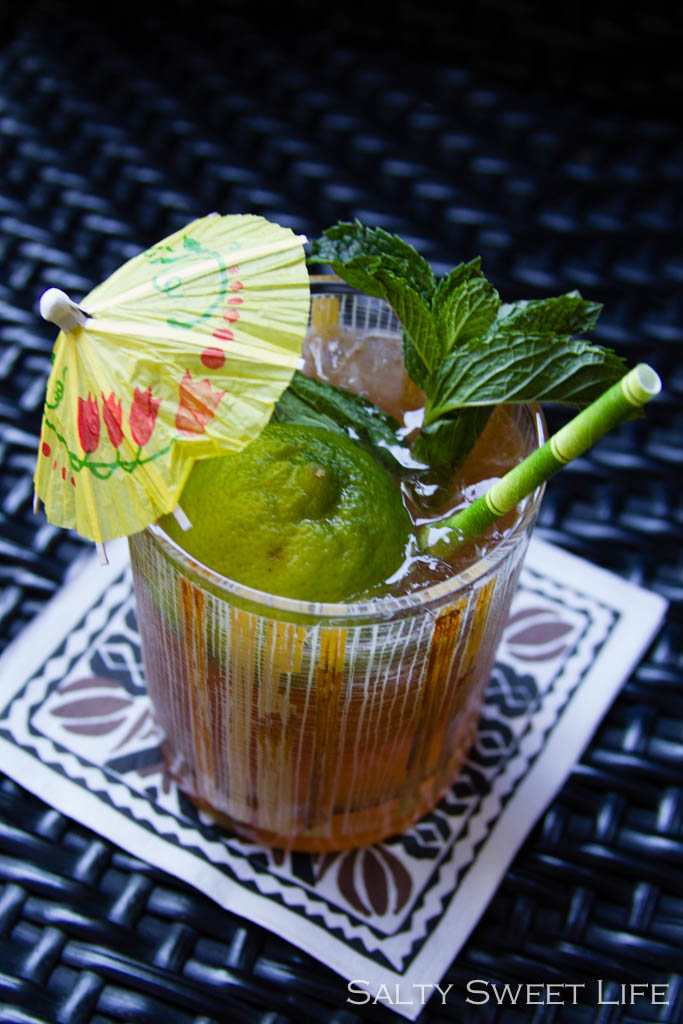 Presentation is so important–the lime half is placed in the drink to resemble an island. The mint sprig represents a palm tree!

Adam makes his Mai Tais based on the original Trader Vic recipe but tweaks it just a bit for his personal taste and calls it his “Mai Tai 2.0”!   For example, instead of rock candy syrup, Adam makes a honey syrup consisting of two parts honey and one part water, simmered and reduced until it reaches a pourable consistency.  Adam also uses a little less lime juice–1/2 of a lime instead of the traditional entire lime so that it’s not too tart. Adam uses two different rums for his drink–a high quality (not spiced) rum like Appleton Estates Jamaican Rum and Meyer’s Original Dark Rum.

The resulting drink is sweet and very, very strong!  Like, the kind of strong that sneaks up on you and leaves you swaying like a palm tree in the breeze (or maybe that’s just me)!  Adam offered me “a little refresher” several times during the evening and let’s just say that I needed a ride home later that night because I found myself curiously unable to walk in a straight line! 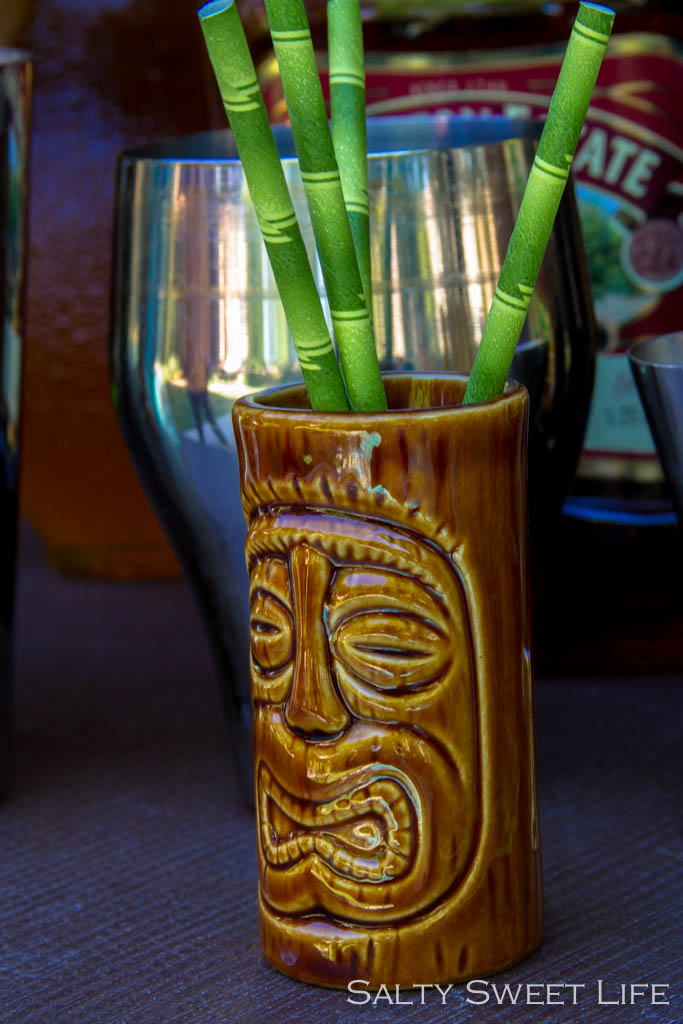 Tikis are everywhere in Adam’s home! Even down to this gorgeous toothpick and straw holder! Even the straws are Tiki-inspired! 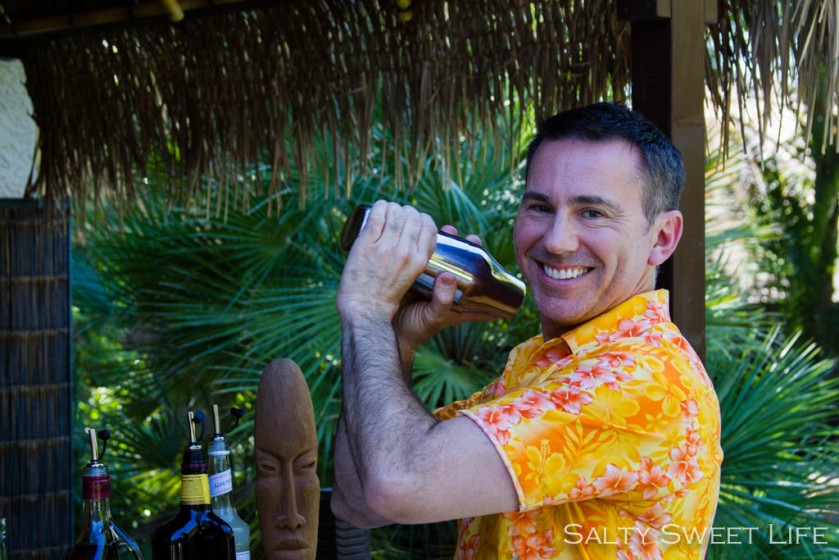 Add all of the ingredients except for the mint sprig and lime rind in a cocktail shaker filled with ice.  Shake vigorously, then pour over ice.  Garnish by placing the spent lime half upside down on top of the ice.  Take the mint sprig in the palm of your hand and with your other hand, give it a good slap to release the fragrant oils. Place the mint sprig behind the lime so that it looks like a tiny palm tree!  If you desire, throw in a little cocktail umbrella!  Enjoy!

I had such an incredible time at Adam’s place that I wanted to bring some of this Tiki magic home with me! Sadly, I lack the artistic skills to build a Tiki Terrace in the backyard (and something tells me that the husband might not be game for another of my home projects).  But, since that night, I’ve been listening non-stop to Pandora radio’s Exotica and Martin Denny Stations. Interestingly enough, this genre is having quite a resurgence! You can believe that the next time I throw a cocktail party, this is going to be the soundtrack! Martin Denny’s 1959 “Quiet Village” album will make you feel like you just landed in paradise! I’ll light some tiki torches (easily found at any large home improvement store or garden center); then mix up a fabulous Mai Tai and sit back and relax! It’s like a vacation in a glass! 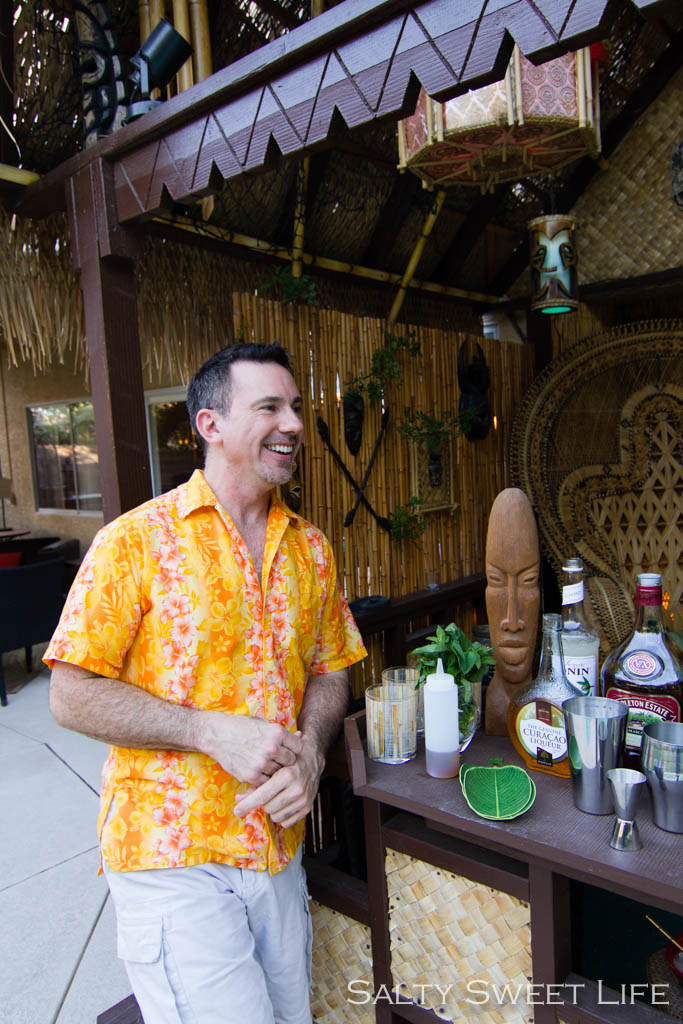 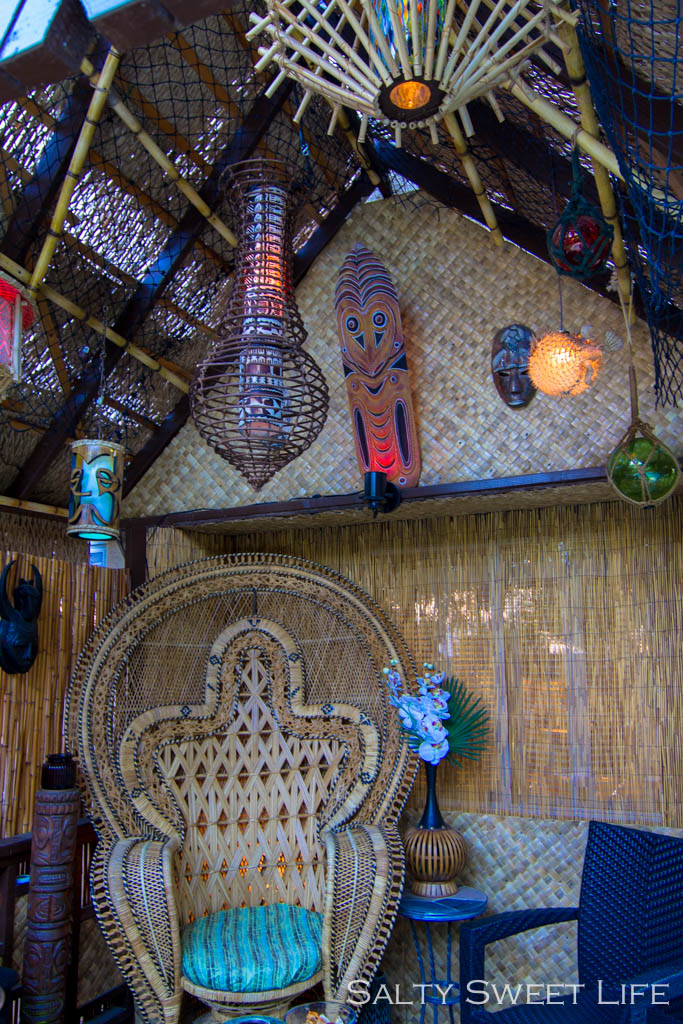 Thank you Adam, for your hospitality and for allowing me to photograph your sanctuary!