August is playing a trick on us.  It’s usually a million degrees here, but between overcast skies, afternoon thunderstorms and temperatures hovering around 100 degrees, I’ve almost convinced myself that Autumn is right around the corner.  So pervasive was this thought that I actually turned on my oven and made this Heirloom Tomato Tart!

I know I’ve been waxing poetic about heirloom tomatoes these last few weeks, but I cannot resist! Tomatoes are just so juicy and sweet and plump this time of year that I cannot help myself. Fresh tomatoes are here and we are stuffing our faces with them every chance we get! Before long, it will be October and all we’ll have are canned tomatoes or at worst, those awful mealy, off-season tomatoes at the grocery store!  So, I hope you’ll bear with me for one more week while I continue to gorge myself with vine-ripened heirloom tomatoes!

This tart was inspired by a dear friend and coworker who makes the most amazing comfort foods!  She is the Queen of Cream; the Baroness of Bacon!  Everything she makes is just filled with so much love and joy and butterfat (and oftentimes, bacon fat)! This dish was inspired by her very own crustless Ricotta Pie which I always look forward to when she brings it to the office!  It is so decadent and rich and filled with creamy, ricotta cheese! She finishes it with roasted grape tomatoes, warm from the oven.  I fully intended to follow her recipe, but I accidentally left the recipe at work, so, I had to improvise and I was so happy with the end result!  I filled a buttery, flaky pie crust with a mixture of ricotta, parmesan and goat cheeses, fresh herbs, and garlic.  In honor of these last days of summer, I kept it light and topped it with fresh tomatoes, a drizzle of olive oil, and fresh-picked basil! I used mini heirloom tomatoes from Trader Joe’s, but feel free to use your favorite type of tomatoes. This tart is perfect for brunch or a light lunch and I promise you won’t be sorry that you turned on your oven in August! 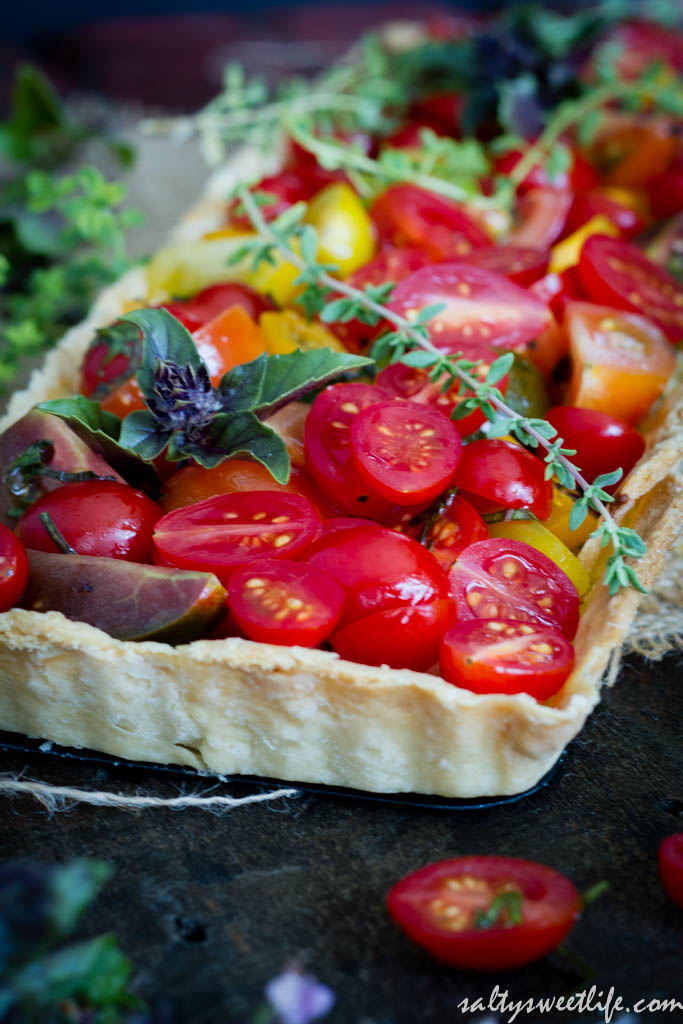 I made this tart crust from scratch, but I will not judge you at all if you want to use a pre-made pie crust for this dish!   Since I am far from an expert at making pie crust, I will tell you that I used this recipe from Martha Stewart, because if anyone is an expert in pie crust, it’s her! This recipe makes enough for two crusts.  You can freeze the second crust for a future tart!  For this tart, I used a 14″x4 1/2″ rectangular tart pan with a removable bottom and blind-baked the crust prior to filling it.  My tart crust was far from perfect-looking…let’s call it “rustic”, shall we?